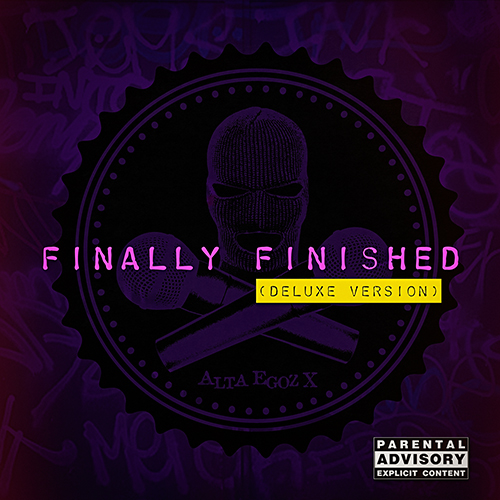 Considered the official foundation album for Playaz Cliq Recordings, Madman the Greatest and DJ Zimm Zimmah (formally known as Alta Egoz X) reincarnates the now obsolete Nuthin’ but Skills album as Finally Finished.  Anybody who remembers the first version will undoubtedly be tempted to compare the two.

Whilst the original project delivers the raw essence of history that built the blueprint for the Playaz Cliq sound, this version serves as a reminder of the label’s humble beginnings.

Led by the vocals of DJ Zimm Zimmah, Madman the Greatest serves as both the primary producer and supporting artist trading lyrics on 7 out of 14 tracks of the tracks.  Primarily developed as an Alternative Hip hop album, there are so many different styles that make up this release.

Inspired by Chiptune; Synthwave; Industrial, Latin Music, Drum ‘n’ Bass and House, this mismatch of sounds somehow come together glued by the vocals from the duo. They both take you on a journey of raw lyrics on songs like Industry Takeover and On my own right through to Girl songs like ‘No Girl Like you’ and ‘Show you Love’.

Both ‘No Girl Like You’ and ‘On My Own’ gets the additional production treatment from M Giggy and Billy Dazzler acting as bonus tracks on the release.